Dr. Markinson on the importance of SteriShoe as an adjunct when managing foot infections:

Dr. Shapiro about his experience with SteriShoe reducing the recurrence of fungal foot infections:

Footwear disinfection is an important but often neglected consideration in the prevention of recurrent foot infections. This is especially important in diabetics and circulation-impaired patients. Shoe Care Innovations has answered the call for reliable disinfection of footwear with the invention and development of the SteriShoe® shoe sanitizer.

In June, I will be in private practice for 32 years.  During that tenure, I believed there was no good or safe way to treat patients with onychomycosis.  I often saw a situation of co morbidity whereby there was moccasin distribution tinea pedis along with the onychomycosis.  If I ventured on a treatment program with patients, I always stressed the environmental control for the fungus but also realized that was a daunting task.  How could one eliminate the fungal spores in the footwear that would again be activated the next day when the patient put the shoes back on.  The most difficult situation of course is that the footgear was a perfect incubator for the fungus; a warm, moist and dark environment.

From the point of view of being the clinician, there was always that usual triad of difficulties mentioned in the attempt to manage this situation.  Treat the skin, treat the nails and treat the shoe!  It became my belief that the most difficult task in this process was to treat the shoe (environment), which I felt was the source of poor results and/or re-infection for those who were fortunate enough to get good results at first.

Then, along comes the SteriShoe® shoe sanitizer.  Perhaps the missing link and the problem solver in this dilemma!

Since the advent of SteriShoe® shoe sanitizer, I instituted a fungal nail treatment program in my practice.  Since I can now offer patients the ability to sanitize their shoes and destroy the environmental fungus in their footgear, I feel a confidence in treating fungal disorders of the foot I was not able to embrace before.

With that having been said, I am enthusiastic that your company appears to have given me a new scientific foundation for treating conditions that prior to this seemed relatively untreatable or treatable with little long term rewards

We are running a successful podiatric practice with multiple locations in the Seattle area. For several years now we have offered the SteriShoe sanitizer to our patients. We have found SteriShoe to be an excellent addition to our practice. Patients find the product easy to use and see value in sanitizing their shoes. SteriShoe has benefitted our practice as a revenue generator and as a technology that has improved patient outcomes.

I have been a podiatrist for over 25 years. In April of 2009 our practice implemented the SteriShoe sanitizer as an integral component for our laser treatment of onychomycosis (toenail fungus). The SteriShoe is the part of the treatment protocol to prevent re-infection from contaminated footwear since shoes are considered to be a major cause of reinfection. Our patients like the SteriShoe sanitizer because it is easy to use and it doesn’t use chemicals. I like the SteriShoe sanitizer because it has been an excellent way to continue to grow our practice and provide better care for our patients. We’re delighted and proud to require SteriShoe as part of our treatment protocol for onychomycosis and highly recommend the product. The company continues to further its research and it stands behind its product.

I have been using SteriShoe sanitizers in my laser clinic and recommending them to my patients for the past 3 years. They are both safe and effective. My patients find them convenient to use. My patients appreciate not having to use anti-fungal aerosols or powders. Furthermore, Shoe Care Innovations has provided excellent customer service and support. I highly recommend SteriShoes as part of preventative care for onychomycosis.

I routinely suggest use of Steri-Shoes to all of my laser patients as part of a home, foot hygiene program.

As a 17 year veteran of the podiatric profession, I have had the opportunity to work with many companies and many products. Most of which I have phased out of my practice because of either unsatisfactory products, poor customer service or the product simply did not perform according to patient expectations.

Since 2008, it has been my pleasure to work with SteriShoe because you are always over delivering in both quality and customer service. You are accessible and knowledgeable with real credibility. The actual product is easy to use and deadly effective in the shoes. You can almost hear the pathogens scream to their doom.

Thank you for being an exemplary company, helping practitioners to help their patients. 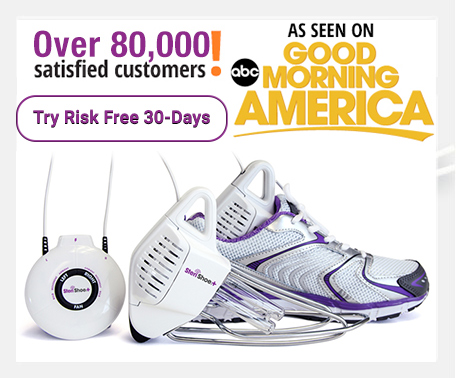